Our mooring off Sandy Island, Cariacou, Grenada has served as our home from the day we checked into Grenada on March 18th.  We could not have asked for a more ideal location to quarantine as the course of Covod-19 unfolds.

At any one time, we had as few as 3 other boats as neighbors, and as many as 7.  Some came and went and came back again.  There was no place we would prefer to quarantine so we remained.

We have been provided with a service to secure groceries, as we are not permitted on land in Cariacou.  We place our order with Alison, a proprieter of the Paradise Beach Club restaurant on Cariacou.  The restaurant is closed, but Alison oversees efforts to ensure cruisers are provisioned.  Cariacou receives its groceries from Grenada (the big island) and there is no way to know what will be available on a given day.  Alison stands in lines with people in masks keeping 6 feet apart, sometimes for hours.  She has invariably brought us as many of the items we requested as possible, and does a great job of substituting when necessary.  We eat well – never better than on the occasions a blue marlin has been caught.

Things to do while moored off Sandy Island – Underwater

You may think that remaining on a boat such a long time in one place would be tedious, but we are never bored.  There is a very lovely reef within swimming distance from Ice Floe and our snorkeling has rewarded us with views of frightening moray eels, a small yellow snake head peeking out of a hole, slipper and caribbean lobsters, two types of sting rays (yellow and southern) a spotted eagle ray, a host of vibrant corals and other sea invertebrates and many species of fish.  Every visit reveals something new and we never get tired of snorkeling on the reef and along the island shoreline.

While sitting in our cockpit, we have been surrounded every day by the heartless slaughter of small and juvenile fish.  We see large fish as they decimate the huge schools of tiny and young fish.  We have observed a progression of the type of predators, as well as the seabirds who take advantage of the disorganized fish that come too close to the surface.

Underwater predators we have observed include redfin needle fish, barracuda, and jacks.  It is common for the predators to launch themselves from the water, especially in the initial attack.  At times this is a single predator – they may fly straight up in a tight arc or cross an amazing distance.  Sometimes groups of predators come by in what looks like an underwater airplane configuration.  They will suddenly erupt just above the surface.  We believe all of these tactics help them disorganize their prey making them easier to catch.

Above water predators have included terns, laughing gulls, brown-footed boobies, and pelicans.  They continually keep a watch and when the fish strike, the birds are right behind them.

The innocent prey are generally schools of silversides or young fish.  The predators have varied over the weeks – most recently the horse eye jack, perhaps as some of the prey has grown from half inch to several inches. 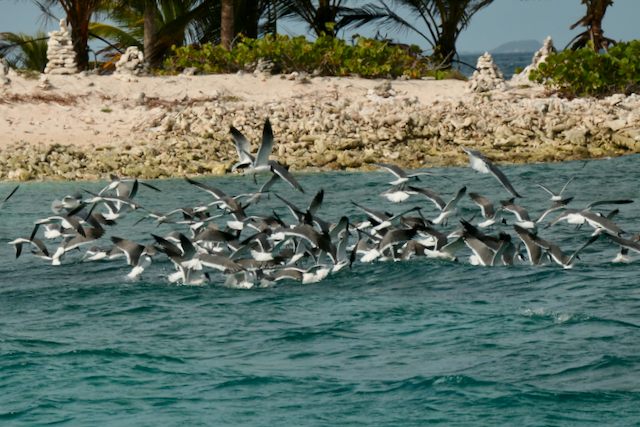 Initially Duhkxy reacted to every loud splash from the attacking predators.  As he has grown accustomed to the behavior, he reserves his barking to instances when he becomes bored or the attack is particularly loud and close to the boat.


Watching the birds can reveal some behaviors you cannot imagine.  Have you ever seen a seagull stand on the head of a pelican?  WE HAVE, many times.  After a pelican catches a fish, it also takes in a large amount of seawater.  Before swallowing, the pelican allows the water to drain out of its pouch.  In this interval, gulls hang around and often stand on the pelican hoping they can snatch some of the catch.

Many larger birds of prey routinely steal fish right out of the mouths of others.  We have observed that here, with frigate birds taking fish from boobies.  In other locals, we have seen eagles and osprey do the same.  We wonder if this is the main way frigate birds satiate their hunger as we routinely see them soaring above but have only rarely seen them catch a fish.

Our neighbors entertain us with their water activities.  Some paddle board, some kite sail, some kayak, and once, we watched a cruiser successfully use his hammock as a sail for his kayak.  He had a little better luck than Marilla when she tried this in the Boundary Waters.

At the end of day, we sit in the cockpit and watch the sun go down.  No two sunsets are the same.  Each is a peaceful, end of day, experience.

Our loved ones and humanity as a whole are never far from our thoughts.  Stay well.