Nice and Villefranche-sur-Mer are separated by a hill.  The face of each side of the hill look away from each other and at their respective harbors.

Nice is a large French city familiar to many.  Approximately one million people live in Nice and four times that many tourists visit each year.  We have been to Nice on quite a few occasions – most often picking up and dropping off family members who have come to visit us in France.  It is a lovely city, but without question, we have devoted very little time getting to know her.

We spent a day in Nice with Allison, Mike, Riley, Tristan, Marilla, and Mitch during the summer of 2017.  Marilla and Mitch were already on board Ice Floe and were the first to take a trail up to a beautiful park with views overlooking the famous Nice beaches, her harbor, and the hillside separating Nice from Villefranche-sur-Mer.

The famous white sand beaches of Nice are bordered by the Promenade des Anglais.  This promenade was the tragic site of the devastating terrorist truck attack on Bastille Day, July 14th, 2016.  The terrorist mowed down nearly 300 people, killing 86.

Nice and Villefranche-sur-Mer are separated by a hill.  The face of each side of the hill look away from each other and at their respective harbors.  Many lovely homes have been built into each hillside, an engineering feat characteristic of many hillsides in France, particularly those overlooking bodies of water.

We anchored in Villefranche-sur-Mer’s beautiful, uncrowded, harbor the evening before Margaret and Burt flew into Nice.  We let them rest up with a quiet dinner on Ice Floe following their arduous flight from home (Buffalo to Dublin to Nice).

The following morning we took them to visit Villefranche-sur-Mer.

Villefranche-sur-Mer translates to Tax-free village on the sea.  It acquired the tax-free status following the transition of the area’s inhabitants from hillside olive farmers to coastal fishermen.  In 1295, the Duke of Provence offered tax-free status to inhabitants of the hills if they would move to the coast and provide a first-line defense against marauders (Turk Saracen, et al) who would use this coast to establish a base from which to invade Nice.

Villefranche-sur-Mer has approximately 8000 people living there.  It has one of the loveliest, quaint, Old Towns we have visited, to date. 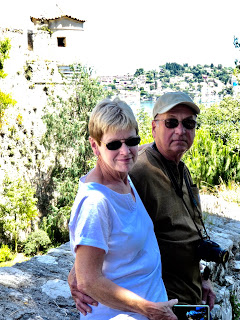 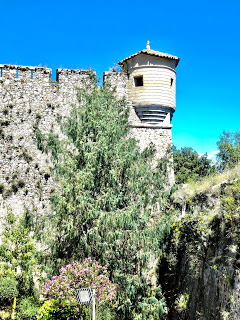 It appears we sold Margaret and Burt on this beautiful country on the first day.  Burt commented early on that if anyone asked what he liked about France, he would respond “There is nothing I do not like”.
It was such a joy to share this experience with two kindred spirits. 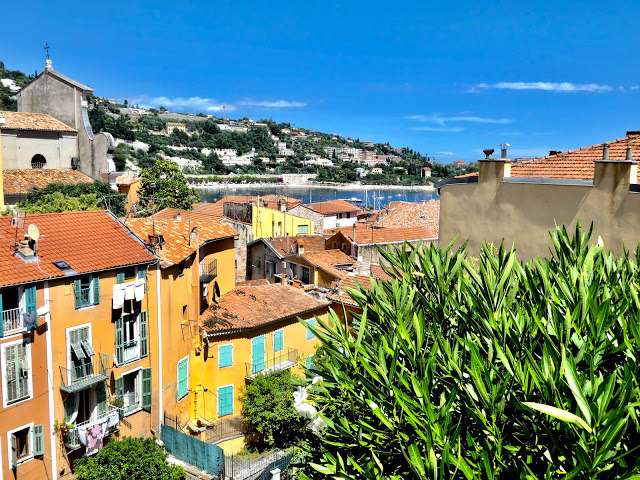 The hilltop, and consequently the village is steep.  Many of the narrow streets are stepped and beautifully paved.  We spent a wonderful morning and afternoon exploring them.

While this charming town is a renowned tourist destination in its own right, it stole our hearts.  From our trip through the canal / river interior waterways to the Riviera, it has been these villages that have drawn us to them and helped us to cherish our time in France.