The Deshaies River hike is described in Doyle’s Cruising Guide as a “one to two hour”…, “cool and shady scramble”… ”  The trail was said to end about 20 minutes after a road intersects the trail on the left at “a giant cave-like gully, with a waterfall at the back of it”.  It is noteworthy that he acknowledges that “Several readers have complained that this hike is difficult” although at the same time he challenges this assessment with a comment “on the other hand, a five year old hiked here for two hours without any problem”.

Let me start by concluding that we enjoyed the hike very much.  It was indeed shady, and we scrambled up and down many, many, many boulders, but we were decidedly not “cool”.  I venture we sweat a half gallon each.  There is considerable overall elevation to the hike as the river flows from the top of a small mountain (large hill just doesn’t quite describe it).  We found it to be a very strenuous hike and Duhkxy agreed!!!

Bring lots of water, shoes that can get wet, strong legs, and some degree of balance (I am decidedly not strong in that regard and managed the trail without falling – YAY!).

We were surprised to see palm trees growing in this dense forest – having associated them in our minds as the lovely trees lining beautiful salt water beaches.

We were three hours into the hike and we saw no sign of any road connecting with the trail on the left or right side.  This was cause for dismay as our plan had been to take the road back.  It would be long past dark if we needed to follow the trail back.  We forged on for a considerable while.

We encountered some very large ants industriously carrying loads much larger than themselves.

But, we did not find an intersecting road.  The following two pics are of the most beautiful river scum I have ever seen.

We marveled at the unusual way some trees grow in the tropics.  We hypothesized their growth habits evolved in a world that never saw a freeze or snow.  When encountering an obstacle, a limb may snake around it.  It is sometimes hard to distinguish a limb from a root.  Trees thrive growing on top of rocks or with three quarters of their roots undermined. 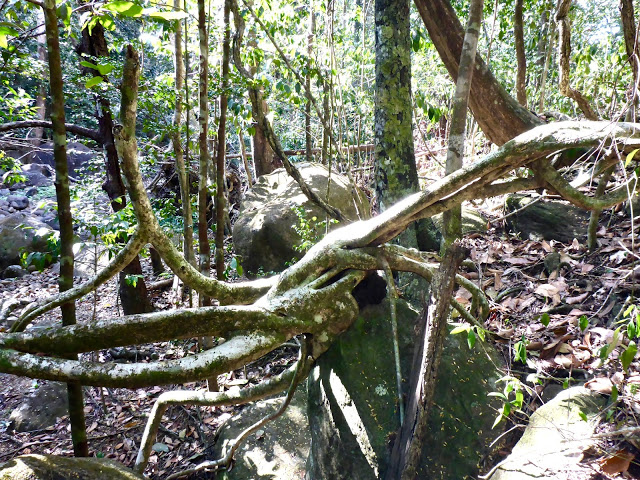 We found a large ceiba tree a little way into the forest on the left side of the river.  These trees grow to enormous sizes and have the most amazing roots that extend 10 or more feet beyond the tree.

Moist forests in the Caribbean have many “air” plants that grow on other plants and rocks.  The one below was common on the trail.

Exhausted, going on four hours, with no sight of road or waterfall, we turn back.  We look for two concrete blocks that may be steps leading to something George remembered seeing that might have been a house in the woods.  Beside the steps was an old sign with “Interdict” barely discernible (equivalent to no trespassing).  Upon finding it, we clawed our way up a steep bank hearing what sounded to us like religious chanting.  The grounds and buildings appeared to belong to a religious group.  There were several areas with stations of the cross represented and there was evidence of vegetable gardens and animal pens.  A woman who had just driven up kindly showed us how to get to the road and we wearily headed for a beer in town.

This fun story cannot end without my sharing information we found on this trail (after we survived it).  Accounts from a number of sailing bloggers indicate that, indeed, there is a road and a lovely waterfall at the end of the trail.  I think Duhkxy was just slowing us down.

Our favorite was from http://www.gowitheflow.co.uk/2017-2/guadeloupe-nov-17/deshaies-river-walk/

Michael (Uncle and brother) is joining us in two days!