Fast Forward to the Present

We are skipping momentarily past some weeks of our travels to let you know what we are up to and where we are right now.   This is our 9th day in Corsica, July 23rd.

We bade a bittersweet farewell to the French mainland;  sad as to the uncertainty of when or if we will return, but excited to move on to exploring Corsica.

Long passages (this passage was ~ 18 hours) are generally timed to make sure you arrive at your destination in the daytime.   We left around 5:00pm on Friday, the 13th and arrived the next day at 11:30am.  The waters and wind were calm so we had to motor.  We tried fishing in the daylight hours but had no luck.

First impression – Corsica is a mass of mountains layered upon mountains – beautiful and largely untamed. 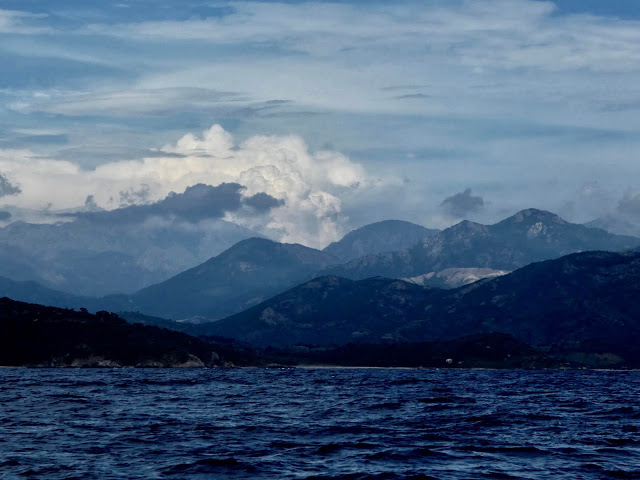 We initially chose an anchorage off Ile Rousse.  This anchorage is known to provide limited protection from prevailing winds.  We chose it none the less as all weather reports indicated winds would be mild and from a direction protected by the anchorage.

We took a LONG nap and when we woke up we noticed the boat had swung around 180o – winds were still mild – for about 5 minutes.  Then suddenly, the winds picked up to 20+ knots and the boat was moving.  It is always a concern that the anchor will fail when you have strong winds dragging in the opposite direction from that which the anchor was set.  We quickly pulled anchor and headed for another (luckily nearby) anchorage.

Second first impression – winds and weather reports for Corsica are just as reliable as on the French coast.  Best to make decisions, when possible, based on the prevailing winds rather than the predicted winds.

The following morning we were on our way to a marina in Sant’Ambroggio so we could watch the final match for the World Cup – France vs Croatia.  We had seen the earlier two semi-final matches when Croatia beat England (significant jubilation all around) and when France beat Russia (town went mad for hours and hours).  For the final match we found seats at a restaurant that had a large screen TV setup outside.  We enjoyed pizza and beer while the French team won 4-2.  Sant’Ambroggio is a little town, with few year round inhabitants.  Consequently, the jubilation was not as loud as on the mainland, but it was a joy to see such national pride.  A wonderful fireworks display was put on after dark.
Sant’Ambroggio residences are largely vacation rental properties.  They are principally small, attractive, one or two story buildings – often a number of them are attached.

The seaside part of the town has a very nice sand beach, the marina, two restaurants, and a Club Med.  There is also a butcher shop (Boucherie), bakery with bread and pastries (Partisserie) and a small convenience store with limited fruits and vegetables, et. al

Further inland and at a higher elevation there are some beautiful large homes, a small grocery store and the train stop where you flag down the train.  The train station was a 15 minute walk from the marina.  This provided us with transportation to visit Calvi one day and I’le Rousse the next.

Calvi, like many coastal towns with an enviable harbor, was subject to attack by vandals, as well as other governments.  In its very early history control passed between the Phoenicians, Greeks, and Romans, and later between England and France.

Calvi is a must see destination for anyone in the area.  It is justifiably renowned for its perfectly situated Citadel that sits high above the large town.  This fortress housed those providing governance for the city and shelter for its inhabitants in time of war or invasions.   The Citadel was built in the 13th Century and remains today, largely as it was then.

Whether you approach Calvi by boat or train, the Citadel can be seen for miles.  The fortress walls are incredibly high and the protection they afforded is evident.

Within the walls of the Citadel, are tall buildings which we imagine once housed the more prosperous citizens, their servants, and shopkeepers.  Many of these remain residences and shops today.

There are many inviting restaurants tucked in here and there.

This view from within the Citadel, of the harbor and town below, provide perspective of the surrounding area the Citadel was built to protect.

The town outside of the Citadel has much to offer in its beauty, history, and culture, as well.  There is argument to be made that Calvi was the birthplace of Christopher Columbus, although the academic consensus is he was Genoese.  If so, his birthplace was not on Corsica, but in an area that in turn became part of Italy as we know it today.

Our first serious introduction to the cuisine of Corsica was in Calvi.  It was love at first bite.  The cheeses and hams are unique to Corsica and reflect the diversity of cultures that coexist on this island.

Our train ride to Ile Rousse was timed to shop at their open market.  Once again, we found distinct differences between the market in Ile Rousse and those we had frequented on France’s mainland.
Most markets in France had an abundance of vendors selling local vegetables and fruits.  One very nice fruit and vegetable stand was in the market in I’le Rousse, but many more stands were devoted to sausages!!  In addition, there were many small cakes and cookies.  Fresh baked cakes and cookies are not prevalent in French supermarkets, bakeries, or markets.  We have not been deprived, mind you, as the supermarket packaged cookies, most of which feature chocolate, are none too shabby.
The seafood vendors at the Ile Rousse market also offered lobsters. crabs, and enormous shrimp – at exorbitant prices – items we had not seen in mainland, France markets.  To give you an idea of price – the lobsters were 60 euro per kg.  That is well over $30 (US) per lb.

Our familiarity with Galleria is only from offshore as we anchored in a beautiful inlet there.

The rugged landscape changed by the hour as we sailed south along the west coast of Corsica to Girolata.

We arrived at the Gulf of Girolata towards the end of the day and anchored just south of the town, went for a swim, had dinner and headed to bed.  We rose the next morning to go and explore this truly unique village.  The village was estimated as having 108 residents in 2008 (most recent information I could find).  It has electricity but no road access.

The Fortress was built between 1551 and 1552 to defend against Barbary pirates.

Other than during the brief months at the height of tourism, during which thousands of people visit Girolata, the town is a farming community.  Cows roam freely throughout the village.

The rock throughout the region is an amalgam of minerals of many colors which contributes greatly to the beauty of the area and the buildings constructed from it.

George and I spent several hours snorkeling in this area.  We observed many species of small fish, invertebrates and plants.  It was, by far, the best snorkeling we have had in Europe.

The water temperature was a wonderful 82 degrees which only added to the enjoyment. 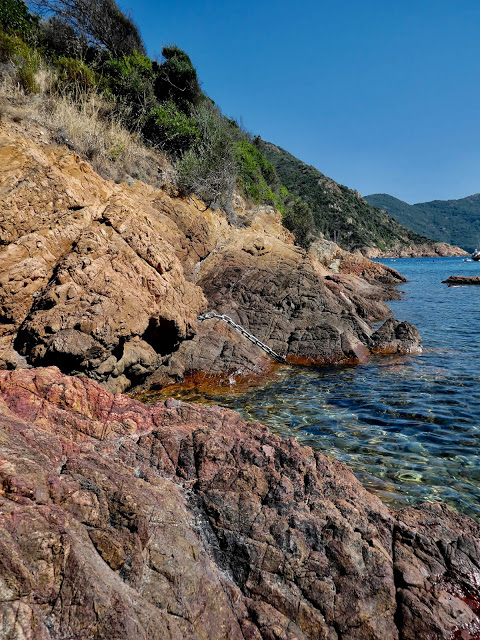 That’s all for now.  Corsica is not only beautiful, but every place we visit offers something unexpected and unique.  We are having a wonderful time.